One man’s hilarious quest for his lost manhood – this is a mad romp through miracles and missing masculinity.

So begin the bizarre adventures of Gilbert Frigate, projectionist, whose misfortune it is to be parted, suddenly and bloodlessly, from a most vital portion of his anatomy. Distressed, Gilbert takes consolation where he can: at least he’ll look better in tights.

In this wildly hilarious and intriguing novel, Martin Myers ranges from mythical to medical, biblical to blasphemous, vaudeville to vituperation, in a romp that includes faith healing, film making and the Second Coming, though not necessarily that that order.

“… a pen sharper than any scalpel… richly inventive author driven by the quirkiness of world and time.” – Books in Canada

“A galloping lampoon on religion, medicine… sprinkled with slapstick humour and a dash of mysticism… Brainy, creative and cool.” – Montreal Gazette

“Exciting, preposterous, hilarious and absorbing. The man’s talent is a light in a haunted house.” – Windsor Star

“The language is a delight… Myers is both funny and profound… obscure and crystal clear.” – Canadian Review

“… an inventive, bawdy and entertaining trip… clean, careful writing and an engaging viewpoint… a fine comic sense and superb use of dialogue… a literary puzzle with many absurd solutions… delightfully absurd possibilities.” – Ottawa Citizen

“A funny book, brilliantly written and universal in its theme.” – MATRIX

“Immensely enjoyable. A scream, a lovely lull of hysterical fun in a woebegone world of inflation and upheaval.” – Scotia Sun

“… humour is reminiscent of THE ASSIGNMENT, a shoulder shrugging in the face of the incomprehensible.” – Quill and Quire

“… works with a one-two punch – first it provokes and amuses, and then leads to deeper reflection on the human condition.” – PETER GIFFEN, author, editor

“… a master of illusion…” – Publishers Weekly

“… a pen that is sharper than any scalpel … a richly inventive author, a comedian driven by the quirkiness of world and time.” – Books in Canada

“… laughing, delighted, completely taken in by this philosophical comedy, this metaphysical joke, this perfect imitation of the exitless maze of human consciousness.” – New York Times

“A kaleidoscope of humor, suspense, history, poetry, time travel, and philosophy, not to be taken seriously except for when it should be.”  – WILLIAM BARNETT, playwright, New York

“… a heavy-hearted burlesque on themes too profound always to be taken seriously, the creation of a subtle and inventive mind.” – DENNIS DUFFY, Canadian Literature

“… exhilarating reading… genuinely funny… The story he tells is exciting and compelling… wondrous writing… brilliant finale… A world of infinite possibility, transcending the narrow consistencies of genre and tone that Myers renders so imaginatively… ” – CANADIAN LITERATURE 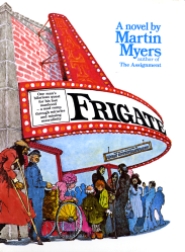